We use cookies to make this site better, find out more. Cookies are on
COVID-19 UPDATE: In line with public health advice, visitor and service restrictions are currently in place in St.Michael's House. See our Covid-19 organisation updates. 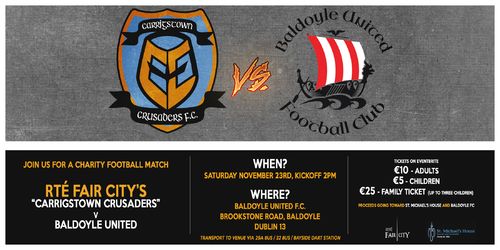 Fair City’s Carrigstown Crusaders have been challenged to a real match by Baldoyle United following on from what was a fictional final between the two teams on RTÉ One’s Fair City last September.

Devastated at having lost on penalties, Damien and Wayne argued the Crusaders loss was as a result of the Baldoyle goalie being off his line. Having none of it, Baldoyle United took to Twitter to demand a retraction but after much back and forth a re-match has been set.

Tickets at the match are in aid of our Services ! THANK YOU !

This event is Sold Out

On Saturday 23rd of November at 2pm on the grounds of Baldoyle United FC on Brookstone Rd, the Carrigstown Crusaders, no longer a fictional five, will kit out in gear generously sponsored by Chill Insurance, Fair City’s sponsor, taking on Baldoyle to settle this once and for all.

Encouraging fans to make the trip to Baldoyle, Fair City’s executive producer Brigie DeCourcy said “We’ve really enjoyed the banter on Twitter from the moment Baldoyle United reacted to Damien and Wayne and we are excited to go head to head on Saturday November 23rd. We’re confident that we’ll put up a good fight. I would certainly encourage people to come out on the day to cheer on their favourites”.

Bitter rivals, Baldoyle United PRO Dave Nutley has said "We heard that Carrigstown were whinging about the defeat.  Even though we won fair and square we are giving them another chance to win the Cup on Saturday 23 November. But we will do our talking on the pitch."

This is a ticketed event, and all proceeds from the match will go towards St. Michael’s House and the club. It is advised that fans travelling to Baldoyle carpool or use public transport where possible. The area is served by DART (Bayside) and the 29A and 32 bus.

Tickets can be purchased in advance on Eventbrite here.

Hear the Radio interviews all week !